The life of meerkats

Meerkats are highly social and charismatic mongooses that live throughout southern Africa. Famous for their striking upright posture, meerkats also have keen senses of smell, vision and hearing. Their diet is mostly insects, but they'll also eat small reptiles, scorpions, eggs and plants. Their excellent sense of smell and digging skills help them find prey even when it's hiding underground. Adult meerkats have to teach youngsters what to eat. Moms will bring home whole foods such as insects or lizards, even scorpions, so the young meerkats can learn how to kill them without getting hurt.

Groups of two or three meerkat families, called mobs, live together in burrows. Mobs spend a lot of their time grooming and playing with each other to bond as a family unit. When they wake early in the morning, they leave the burrow to sunbathe before heading out for a day of hunting. They have a territory of about 4square miles (10 square kilometers) and hunt in a different section each day. Throughout the day, adults take turns looking out for predators while the other meerkats forage. The sentry climbs to the highest rock, mound or bush he can find to look for threats. When all is well, he makes a low, constant peeping known as the watchman's song. He lets out a bark or whistle when he spots a predator, and the meerkats run for the nearest large hole. A meerkat mob will sometimes create a cover by stirring up dust, or they may all stand together in a group to look larger than they are. Meerkats are well adapted to their hot, dusty environment. Long, horizontal pupils give meerkats excellent peripheral vision, and dark patches around their eyes cut glare and help them see far into the distance. Meerkats also have a special membrane that protects their eyes while they're burrowing; they can even close their ears to keep out sand and dirt. They have dark skin and thin fur on their bellies that helps them control body temperature. They can sunbathe on their backs to get quickly warmed by the sun, or they can chill out with their stomachs on a cool rock in the heat of midday. Female meerkats have several litters of two to five pups each year. They usually have pups during the rainy season, when there is plenty of food. Pups are mostly hairless at birth and are born with their eyes and ears shut. They open their eyes after about two weeks, and then start eating solid food around three weeks. After about a month, the pups begin venturing out of the den. The dominant female and male in a mob have most of the young, called pups. Adult meerkats take turns babysitting the pups in a mob. Meerkats are about 12 inches (30 centimeters) in length, with females being slightly larger than males. They weigh about 2 pounds (1 kilogram). They live about 10 years in the wild and up to 13 years in zoos.

Meerkats are widespread in the western parts of southern Africa. They live in open, arid spaces with short grasses and sparse brush. They avoid deserts, forests and mountainous areas.

Where do they live?

Meerkats are relatively widespread within southern Africa. They live in several protected areas and have no major threats.

Meerkat moms can nurse their young while standing upright. Meerkats memorize the locations of thousands of escape holes within their territory, so they can run to the closest one at a moment's notice to avoid a predator. Young meerkats are so wary of predatory birds that even airplanes will send them diving for cover. A study of wild meerkats in South Africa found that they could identify and differentiate the voices of different individuals within their mobs. Meerkats get all the moisture they need from the roots and fruits they eat. Adult meerkats can kill and eat poisonous snakes and scorpions without being hurt because they've become immune to the venom.

Day in the life of a meerkat

Meerkats are extremely social animals. Observing Meerkats is a wonderful experience. They love grooming one another, wrestling and playing with one other. They have avid curiosities and can make a toy of almost anything. Even with all this play, Meerkats do not ignore the need for security. One Meerkat always seems to be a sentry and stands guard to keep the gang safe. There typical day consist of, they wake up early in the morning as the first rays of sun stretch across the Kalahari. The first to come out of the burrow is usually the last one in from the preceding night. This Meerkat surveys the area to make sure the coast is clear after that the others start to rise one by one from several entrances. They start by soaking up the sun to warm up there bodies from the nights sleep by facing the sun and using their stomachs as solar panels.. One may observe some digging around the entrances, this seems to be more like exercise to warm their bodies up. Then the young start to scurry around play and grooming one another, as the elders spend time grooming sunning. Once hunger starts to set in, the search for food is on. The alpha male sets the direction for the day and decide weather or not to move towards another burrow system.. Scurrying hear and there and digging here and there, but always one is on sentry. As the day goes on and the heat sets in they will stop for a rest. These rest periods are longer during the summers but so are the days. As the day cools they are off again in the afternoon in search of food. Just before sunset they will arrive at the den for the night. At this time they will commence on repairs of the den as well as well deserved grooming and giving one another affection which is really marking one another with the anal gland or cheek saliva. As the sun falls, they descend one by one into the burrow for sleep all huddled together. Lastly, they don't like the rain and will stay in their burrow and not forage for food until the rain stops. Interestingly enough Meerkats seem to identify one another my smell rather than sight. That is why the are constantly marking one another. For instance if a Meerkat gets separated for some time and try to rejoin the gang, the gang will think it is a intruder and get in a mobbing defense stance ( mobbing is when they huddle together so to look bigger and present aggressive behavior) until they smell what they think is the unknown Meerkat. Once the sent is recognized everything is fine. 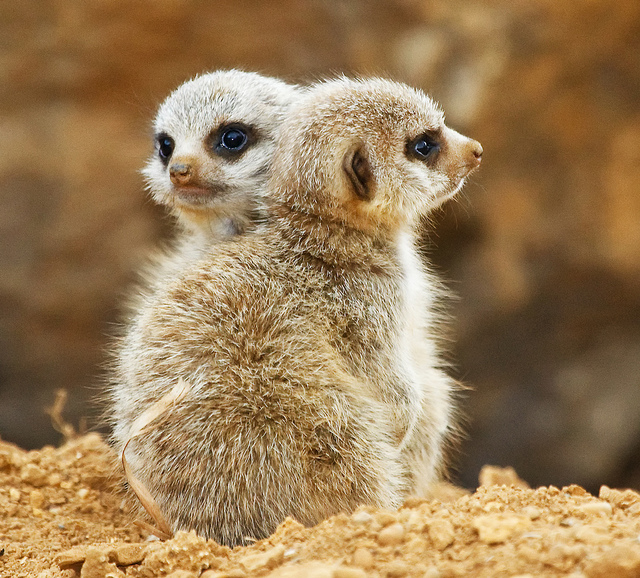 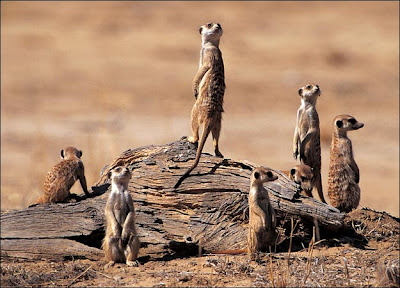 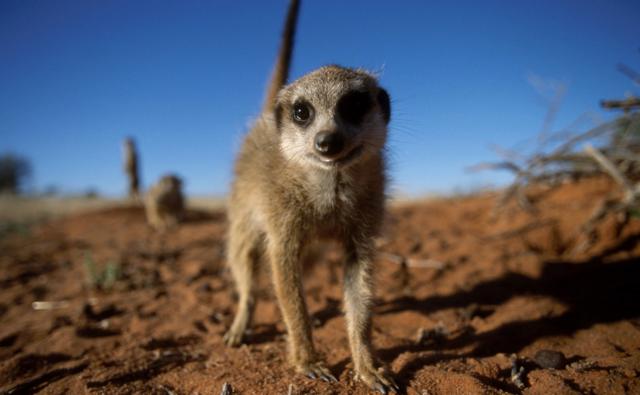